Over 40 years' experience at the heart of horseracing
Follow @JuliaFeilden
Born in Hove, Sussex, Julia spent most of her childhood on a horse's back competing at shows across the southern region aboard her pony Merry Marker. Soon the need for speed grew inside of her and she found an outlet for this urge by riding out for Lewes trainer Gordon Smyth as a teenager.

At the age of 18, Julia made the bold move to the home of horseracing - Newmarket - to work for legendary handler Clive Brittain. Despite being one of only a handful of women working in racing in the town at the time, Julia learnt fast and got to work with top-class horses running in the country's biggest races. As well as this, Julia rode successfully as an amateur jockey, a craft which helped her understand the demands of racing and the importance of jockeyship. 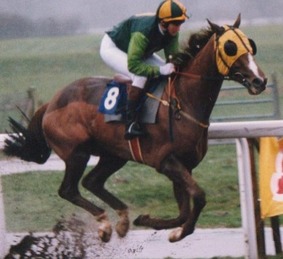 Julia winning aboard Don't Drop Bombs
​After also working for Patrick Haslam and the British Racing School, the perfect opportunity came along for Julia to fulfill her dream of holding her own training licence, a dream which was realised in 2001.
Winners soon followed as Julia built a reputation for revitallising older horses bought cheaply from other yards.

Spirit Of Sharjah wins at Newmarket under Mick Kinane
​
​However, some of her biggest successes have come from two-year olds, most notably Spirit Of Sharjah who won his first two starts before finishing a close third in the Group 2 Norfolk Stakes at Royal Ascot. Her talent for keeping horses sweet meant that Spirit Of Sharjah raced on for a number of years, winning a trio of Pattern races and over £130,000 prize money along the way.

Other notable highlights include: Najaaba - the filly who was bought for just £800 but went on to win five consecutive races which saw her crowned Racing Post All-Weather Horse of the Season; King Flyer was a tough-as-teak stayer who won over £100,000 during a memorable career.

To be a part of her next success story, get in touch.
View Julia's statistics
Tweets by JuliaFeilden